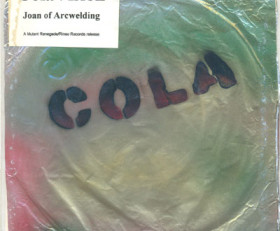 This was a split label release with Dayton based Rinso Records. The band decided to be extra unique with the covers and make them all out aluminum foil which was then painted. The idea was really cool and everybody got a different cover. The only problem was that after the first 112 the band got sick of making the covers and we had to resort to a lame one color photocopied cover.

ColaVision’s “joan of arcwelding” was recorded at cro-magnon studios in dayton, ohio between the hours of 12 and 9 pm The engineer was Mr. Joe Buben. In those 9 hours five songs were recorded. 12 oz. of beer were consumed by Patric, Dave relieved himself a number of times in another room specifically designed for that purpose, Daphne heard many mistakes in the recording that Dave and Patric did not, and large amounts of Cola were consumed by all.

Problem #11
Ford
No Damn Cat
Johnny Walks On The Right

Recorded in July 1993 at Cro-Magnon Studios in Dayton, OH

Be the first to review “ColaVision – Joan Of Arcwelding” Cancel reply