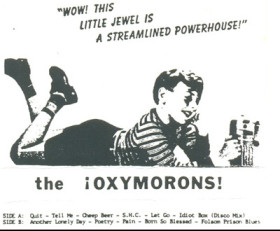 This was Mutant Renegade’s first real release, also known as “Wow, This Little Jewel is a Streamlined Powerhouse!” The quality is pretty spotty, but it was recorded and mixed within eight hours and captures the Oxymorons raw live energy. Their only release with their first drummer and was recorded after they’d been a band for only three months.

Recorded in July 1989 at Cro-Magnon Studios in Dayton

Be the first to review “The Oxymorons – 1989” Cancel reply