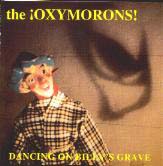 The Oxymorons – Dancing On Billy’s Grave

This was Mutant Renegade’s one and only CD release. Way back when it cost over $4 each to produce a CD. I heard we were the first label in the area to release a CD. They sold really well, but unfortunately the Oxymorons stopped playing not long after this was released.

Recorded in 1992 & 1993 at Mars Studio In Cleveland, OH and Cybertechnics Studios in Dayton, OH

Reviews of The Oxymorons – Dancing On Billy’s Grave – 1993

“Catchy, melodic songs…” – Round Flat Records, Buffalo, NY “Ben Schelker is a talented songwriter/lyricist with the ability to write rock hard hooks and turn a phrase or cliche into something beautiful…” - Trap Door Press, Dayton, OH

“Forget the vastly overrated Breeders, the real sound of Dayton, Ohio, today can be heard in the…of Guided by Voices and the dismembered ‘Mats roll of The Oxymorons.” - Opition, Santa Monica, CA

“…The Oxymorons bring you this 19 song CD with enough variety and quality to actually listen to a 19 song CD! – Hectic Times, Santa Cruz, CA

“These guys ought to be local heros. If they aren’t there is something wrong with Dayton. They play fast paced hooky pop songs somewhat in line with All’s pop hardcore style.” -FOE Magazine, Tampa, FL

“Good stuff! Will we be getting more? - WBWC, Berea, OH

“Nice rough sound – Vocalist need not change his voice at all – Perfection meets an Oxymoron in the larynx. Keep it up!” - WGMU, Fairfax, VA

“This one is really good!” - WPLS, Greenville, SC