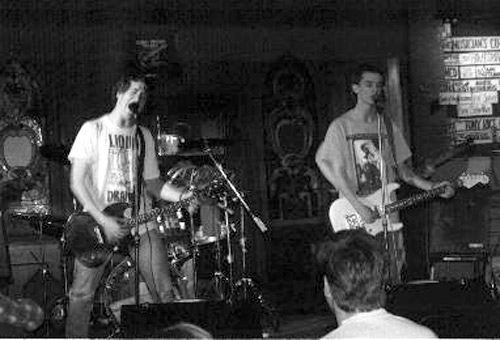 The Oxymorons crashed together in a drunken heap in the Spring of 1989 when Ben Schelker [Vocals, Guitar](ex-U-Dogs) and his friend Pat Hennigan [Drums] invited their friend from WSU Patric Jones [Vocals, Guitar] (ex-Fleshbats) and his friend Grog (Greg Simerlink) [Bass] over to drink beer and play Replacements and Damned songs. After massacring several songs and drinking several beers they played some songs which Ben wrote. Within an hour the four concluded that they belonged together.

The name the Oxymorons came about from a book Ben was reading at the time. Right after he decided on the name Iggy Pop appeared at WSU and Ben, being a huge Iggy fan, told him about the band. Iggy revealed that he too was reading the same book as Ben and therefore it was taken as a sign of a seal of approval from Iggy himself.

Within a month the Oxymorons started playing shows all around Dayton and released their first 10 song cassette, until their drummer quit 5 months later. Ben and Grog decided to handle the situation the way their musical heroes would have, drink lots of beer and listen to the Replacements, Husker Du, Soul Asylum, the Who and the Damned. Once drunk they ventured over to Patric’s and told him the news. He said “fuck it, lets find a new drummer”. So the adventure continued.

Nick Atkinson joined a few months later and the Oxymorons began playing out all over Ohio and Indiana. During the next several years they played throughout the Mid-West and received airplay on over 80 college radio stations throughout the US, Canada and Europe. They released a second cassette, a four song 7″, an 18 song CD and appeared on over 25 compilation CD’s, 7″s and cassettes.

By 1993 The Oxymorons had logged tens of thousands of miles of road time and opened or headlined with such bands as Fugazi, The Dead Milkmen, Green Day, No Means No,Coffin Break, Big Wheel, Local H, Screeching Weasel, Scrawl and The Toll. Taking the clue that all bands should die before they suck, the Oxymorons went into a coma. Patric formed ColaVision (after being in Planet Ed while the Oxy’s were still together) and Nick and Ben formed Candyass. Grog remained doing his label, zine and other miscellaneous projects.

The Oxymorons reformed for a short while in 1994 to play two shows. Then in 1997 there was talk of doing a few more shows before the tragic death of Ben Schelker. The three remaining members of the Oxymorons! reunited in November 2013 with other local musicians as Artist Playlist to mark the 15 year since Ben’s passing away.

SOME COMPILATIONS FEATURING THE OXYMORONS